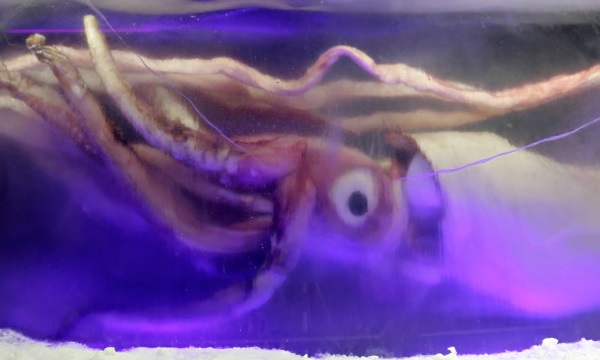 On a scorching day in Kaikoura, New Zealand, beachgoers stood around and watched while a magnificent giant squid struggled for its life. In stark contrast to recent marine rescues, the gathered tourists, most from the UK, Australia and Germany, steadfastly refused to help.

A number of inspiring rescues have occurred in 2015, including that of a stranded great white shark near death in Chatham, Massachusetts; an orca whale trapped on rocks on the coast of British Columbia; and even a bunch of cows who rescued a baby seal from a muddy field in Lincolnshire, UK.

The giant squid, however, had no such luck. Jim White, an Englishman holidaying in New Zealand, was there to watch the squid die. When asked if he considered dragging it back to the water, which was only 8 feet away, he said, “Fuck that, I’m not touching that!”

White was not alone in his opinion. Not one person at the beach was willing to touch or even go near the squid, variously labeling it “ugly,” “freaky” or “fucking weird.” One Australian onlooker suggested killing it with a spear and then barbequing it, but no one liked that idea either.

The giant squid finally died after three agonizing hours in the sun. The carcass was taken intact to a local marine institute, where students and professors spent the night drinking beer and taking photos of themselves with the unfortunate deep-sea cephalopod.

A bad day for the squid, a fun night for the marine institute.