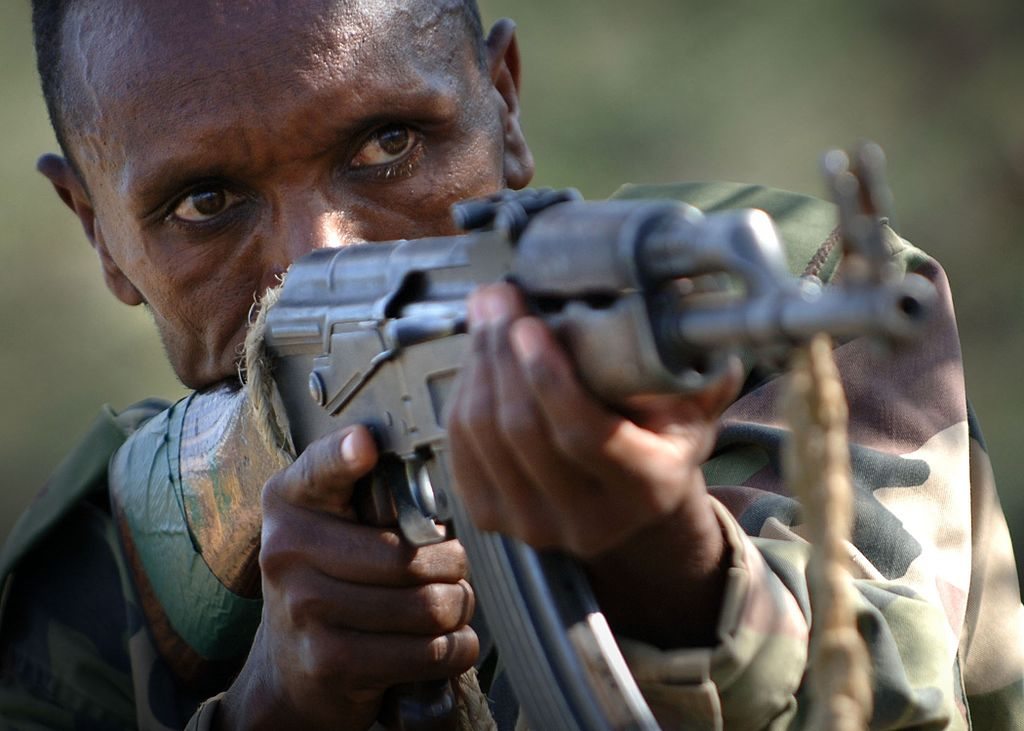 This here story has been proudly writ by Wesley Wayne Maddox Jr., a born and bred Texan with more than 40 years experience in the gun trade business. God bless you, Wesley Wayne.

Should I buy an AK-47 or M16? It’s a classic purch’sing problem faced by many honest Americans and Texans like myself. And, while it goes without saying that we love the USA as much as we love our guns, when it comes to choosing bee-tween an AK-47 and an M16, we simply cannot — can not — discount the Soviet assault rifle just because it’s made by them Communist Reds.

So, putting our God-fearing patriotism aside for just a short old while, which should you be buying?: the all-American M16 or the commie Cold War classic, the AK-47? 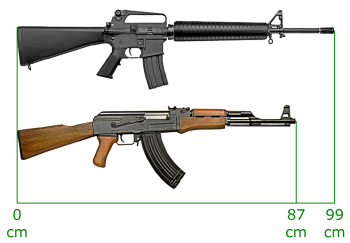 At 34 inches long and 10.5 pounds in weight (loaded, now), the AK-47 is shorter but heavier than the standard M16A1. That there is a conundrum of sorts when purchasing for a loved one, but it’s easy enough to resolve.

If you be fixin’ to buy a weapon for your dear wife, get her the heavier Kalashnikov, especially if she’s a stocky lady with big arms, or the lighter M16 if she’s more of a slender type of woman.

For kids under 12 years old, I recommend the M16 for both girls and little boys. There are two reasons for this: the first being, I don’t believe any child should be introduced to foreign-made items or philos’phies at too young an age; secondly, children are more prone to adapt when it comes to gun length versus weight, and while no father wants a weak child, God forbid, it’s more important to get them to enjoy weapons first, making the lighter child-friendly option a better deal. And believe in me: this ain’t my first rodeo when it comes to buying guns for children.

If you’re buying for yourself, y’all need to take into account ev’thang written below.

If you fancy yourself a slick rick or a deadeye dick, then there’s only one option here: buy yourself the M16. The M16 is truly surgical when compared to its Vanilla Asian cousin, thanks to the lighter, higher-velocity 5.56x45mm cartridge.

With my M16, I’m like a Marine taking headshots in Fallujah at 320 yards, uh huh, and my kids are getting real close to that, too.

The AK-47, meantime, ain’t a tool for headshots. At 300 yards, you’d be lucky to hit a torso when you’re firing prone, let alone standing. In this respect, I’d again call the M16 a better purchase for kids under 12 and for women, simply because they’ll be more likely to hit the target, which keeps them animated and motivated to love guns in a major way, which is what we all want for our families at the end of the day.

When Darryl, my youngest (he’s six), says “Dad, let’s go blow shit up,” I straight away grab my faithful old Cossack, the AK-47. The AK’s heavier 7.62x39mm cartridge penetrates like a Brahman on a Beefmaster, making it a much better option for shooting old trucks and tractors and any other shit that’ll get all tore up and might go boom with enough pen’tration.

On the flipside, the M16 is way much better for what me and my kids call splat attacks. If you’re teaching your kids how to make headshots using melons or pumpkins or the like, the M16’s lighter, higher-velocity 5.56mm bullet is more likely to fragment on impact, giving you that satisfying explosive headshot wound like in the movies.

Here’s one thing to consider: if you have neighbors nearby, be careful with the AK-47. It can quite easily fire a round with enough pen’trative force to go right through vehicles, vegetation and walls, continuing along on its path. That’s awesome, for sure, but my cousin Kenny is currently locked up for 12 years for accidentally putting an entire 30-round magazine into Steve Bickle and his kin, who used to live next door.

Recoil is an important consideration when buying a fully automatic firearm for a woman or a child (or maybe even for a homosexual gay man if you happen to have one of them in your family).

Both the AK and M16 are, of course, capable of semi-auto and full-auto. Techno-logically speaking, the M16 has less recoil than the AK-47, but the Ruskie chopper’s heavier weight and slower rate-of-fire makes for a good lev’ler when all is said and done. Fat kids with strong hands can easily stand and unload an AK-47 into a group of Jihadis without suffering too much from the recoil.

Overall, recoil ain’t too much of an issue when comparing the M16 with the AK-47. It just ain’t. 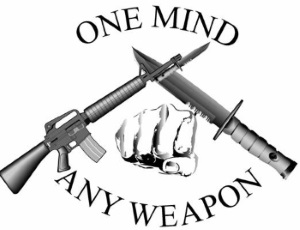 Like a US Marine, your children should learn how to use multiple weapons.

You can fix up a bayonet to both the AK-47 and the M16, which is awesome. Bayonets are proven to increase aggression, bravery and bloodlust in soldiers both old and young; attach one to your kid’s weapon and watch his imagination soar like an American eagle!

When you need a break from the range, teach your children a few “last resort” drills with the M7 or AKM bayonet: stab up some taters or watermelons, hack up a few old tires, it’s all good fun!

If you like a weapon with additional firepower capabilities beyond a simple bayonet, then there’s only one winner here: the M16. Both the M16 and AK-47 can launch rifle grenades and can be fitted with under-barrel grenade-launchers and cup-type grenade-launchers. But the M16 also offers the ability to mount an under-barrel 12-gauge shotgun and the M234 Riot Control Launcher, both of which offer hours of fun for you and your kinfolk and are easy enough to get a hold of, especially if you have police buddies.

Getting hold of Soviet hand-grenades is darn tricky, meanwhile, making the M16 a definite winner here.

When the day comes for us to bear arms in defense of our great nation, to defend all that’s great and noble about being free Americans, weapon reliability becomes the all-important thing.

If you and your kin are trying to degrade a platoon of radical Muslims, Islamists, Jihadists or Ragheads — whatever they call themselves these days — you don’t want a jam just as you line up that headshot, making you and your weapon as useless as tits on a bull.

And, as we all know, the AK-47 has a solid military reputation for reliability, while the M16 does not. Hell, even terrorists know that; that’s why they love AK-47s almost as much as they love blowing themselves up.

So, if you’re choosing between an old M16 and an old AK-47, the Ivan wins every time. But wait up one second, because the modern M16 is said to be as reliable as God’s forgiveness — just ask the Taliban.

That said, I’ve recently gone purchased for myself a Heckler & Koch HK416 assault rifle/carbine just in case the End Times come and my M16 gets all jammed up and I still want to finish off some Arabs or Muslims or Snowflakes with a U.S. military weapon.

My kids now have one Israeli-made Tavor Bullpup assault rifle each as backup, while I bought my beloved wife a Steyr Aug, which is most convenient for left-handers like herself.

I’d happily take my family to war armed with either M16s or AK-47s. However, I’ve thought about this some and I would ideally give my two younguns, Molly and Darryl, M16s due to the weight issue, while the two middle kids, both of which are kind of chubby and no good at aiming, AK-47s, so as they could lay down heavy suppressing fire when need be.

For the eldest two, I really ain’t too sure. I guess I’d give one an M16 with under-barrel grenade-launcher, and the other a straight AK-47 with bayonet, mainly to finish off prisoners without wasting unnecessary ammunition.

As for what you all should buy — an M16 or an AK-47 — hopefully the above tips have helped you out some. Both are darn easy to purchase in this great nation of ours, so you might as well go out and buy one of each! Maybe get one for your birthday and one for Christmas!

God Bless America and long may He keep Her free! 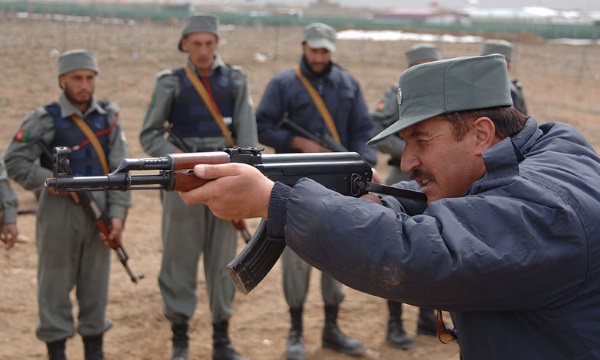 The AK-47 is old, but it’s not dead. Almost anyone can be taught how to use an AK-47 assault rifle, even these raggedy foreign types.