How to Beat Google’s Panda Using the Dig Dog Technique

Google’s Panda update has sent shockwaves through the online world. The algorithm change has prompted a seismic shift within the search results, designed to kill off the hopes and dreams of thousands of content producers, also known as “writers.”

The main casualties have been so-called content farms: Suite101, Associated Content, Article Base and other such “mills.” High quality expert sites, such as StudioKnow, were, in general, unaffected.

In the midst of these changes, however, Google has shafted some smaller enterprises of notable worth, plunging them into the dark depths of the search results where they now linger, starved of air and readership. The risk of unwarranted collateral damage is real. Google’s Panda is relentless; some would even say rabid and slightly unhinged.

Protected Your Site from Google’s Panda

As noted, StudioKnow has escaped any unwarranted drop in the SERPs (Search Engine Results Pages); indeed, we have benefitted from the algorithm change. Why? Well, the site has a reputation for unique, in-depth and trustworthy articles. That alone, however, is not a secure defense against Google’s Panda. What we have done, and what we would recommend to you, is to adopt a little-known natural method: the jackal’s “dig dog” attack.

The Dig Dog Versus the Panda Algorithm

As our readers know, we are dedicated to the furtherance of human knowledge and the protection of the planet’s rainforests. Our green stance makes us very much at one with nature, and it is from nature that we learn to adapt. Our SEO team, reacting quickly to the Google update, immediately turned to the natural world for a solution. Here is what we found on the Pandas Live On website:

The unique hunting skill [of the jackal] is to climb onto the back [of the panda], gouge out the eyes first, then snap at the anus and pull the intestines out, which is called “dig dog”. 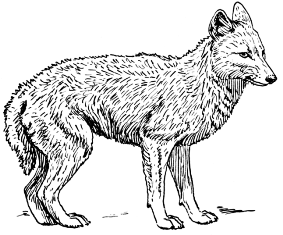 How can we apply the “dig dog” to the online world? Our successful three-pronged attack/defense is as follows:

Even if Google’s Panda update has not yet affected your website or blog, the threat still exists. Furthermore, you may simply wish to protest the recent changes. Our content producers, for example, are mightily pissed off with the quality of the current search results. Multiple Yahoo Answers and scraper sites appearing on page one of the search results? It’s time to release the jackals…

The Great Google Panda Plague of 2011