The Seven Days of Creation: A List of God’s Work 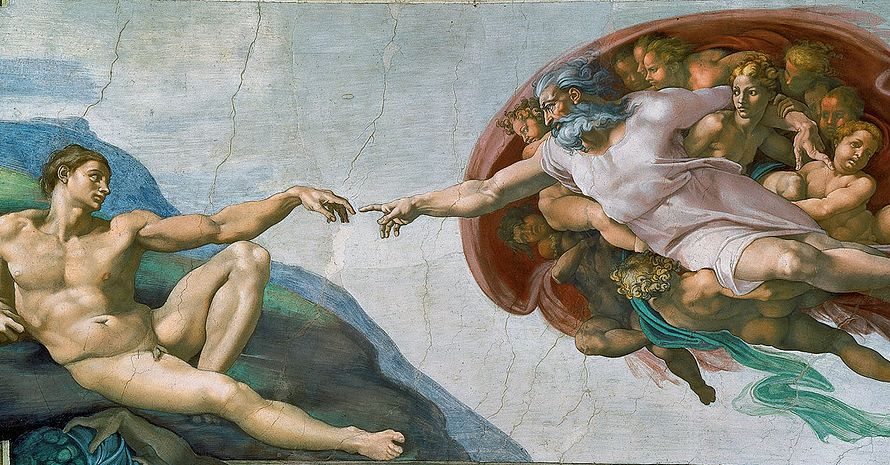 God creates Adam while casually hanging an arm around what appears to be a hot transvestite, while surrounded by naked children. I think that’s now illegal in most states.

The Seven Days of Creation was an amazing piece of work, perhaps the best construction effort in recorded history. God made just about everything we know and love in a week. That’s damn impressive when you think about it, even for a god.

Anyway, if you’re wondering what this whole creation marathon was about, read on for a day-by-day account.

And God said, “Let there be light,” and there was light.

Boom! Just like that, like the flick of a big-ass light switch, God made light. Before light, there was just emptiness, darkness and a slight whiff in the air. After light, there was day and night and the afternoon and evening and breakfast time. Awesome. That was the first day of creation, and it was a damn good start.

Day Two: Expanse, or Sky, or Something Like That

And God said, “Let there be an expanse between the waters to separate water from water.”

The expanse separated the water above the expanse from the water below the expanse. Or something like that. It’s a bit confusing really. Basically, God created sky, a totally revolutionary concept that separated stuff from other stuff. It’s kind of strange that He took a whole day to do that, but God saw that it was good, so you can’t really complain.

And God said, “Let the water under the sky be gathered to one place, and let dry ground appear.”

Day Three was a real landmark occasion. God created “land,” the stuff that humans walk on. He then gathered up the waters and called them “seas,” those big things that humans drown in. But He wasn’t finished yet. Perhaps because He didn’t do much on Day Two, God worked extra hard on Day Three, following up dry ground with…

Then God said, “Let the land produce vegetation: seed-bearing plants and trees on the land that bear fruit with seed in it, according to their various kinds.”

Now we’re talking. God put all kinds of good shit onto and into the land so it would sprout and grow with all kinds of greenery. Within minutes, the land was covered with bananas, figs, bonsai trees, marijuana, opium and loads more besides. What a fucking great day. Nice one, God.

Day Four: Sun and Stars and Stuff in the Sky

God had already switched the lights on, but He knew that whatever creatures came next would probably need to sleep. So He made night. Night was ugly and depressing at first, so He put stars in it. And the moon. Cool. This is how we got days and weeks and weekends and months and paid holidays. Again, God was happy with what He had created. It was good, apart from the black holes, which were a slight oversight on God’s part.

And God said, “Let the water teem with living creatures, and let birds fly above the earth across the expanse of the sky.”

God created birds to eat the seeds and then shit them out across the land, helping to spread plants across the world. At the same time, God created fish to swim and screw in the sea. Originally, God believed that fish would rule the world, but He soon realized they were just too fucking stupid. God had already built Atlantis as a place for the smartest fish to live and ultimately rule the planet, but none of the fish seemed interested. Atlantis soon fell into disrepair and disappeared in a vast swathe of fish shit. Whatever, it was still good.

Day Six: Everything Else and Us

And God said, “Let the land produce living creatures according to their kinds: livestock, creatures that move along the ground, and wild animals, each according to its kind.”

This is where the dinosaurs appeared. Unfortunately, God was not impressed with his oversized reptile creations. They were aggressive, embarrassingly large and clumsy. In need of a fresh start, God launched a fucking big meteorite at the dinosaurs, killing them all instantly. He then plunged the world into an Ice Age, just to be sure. After that little hiccup, God decided to implement Plan B: Humans…

Then God said, “Let us make man in our image, in our likeness, and let them rule over the fish of the sea and the birds of the air, over the livestock, over all the earth, and over all the creatures that move along the ground.”

There we go, that’s us! God made us look like him, which is cool. He created women and men. This eventually led to the creation of everyone else, including Alexander the Great, prostitutes, Hitler, Gal Gadot and, well, everyone. He blessed them, telling them to be fruitful and increase in number (i.e. fuck like bunnies) and to subdue the earth (kill shit and build stuff). The sixth day was a big deal. We now had control over the earth; we soon invented barbecue to cook God’s creatures in the most succulent and mouthwatering way. Everything was good.

Day Seven: Fuck Me, I Need a Break

Yep, even some of the gods get tired. After six days of creating stuff, God decided to chill for 24 hours. He deserved it, because He had made a lot of stuff. And it was good, all of it. The seventh day has been holy ever since, but most humans now use it to recover from hangovers, watch sports and eat too much.

And that was it. The Seven Days of Creation (well, six days of creation and one day of chilling on a cloud) were over. Thanks God! Apart from mosquitoes, cancer and vaginal farts, you did a fucking good job.