Few things are constant in this world. Love fades and external beauty withers; we grow old and we die. One thing, however, is certain: prostitution. Like a big bastard rock in a stream, prostitutes have trodden the rushing waters of history and they remain. For better or for worse, but mainly for better, whores have helped history chug along. Come with me as we examine these legendary tarts: the top 12 famous prostitutes in history, ranked by hotness (how else would you order them?). 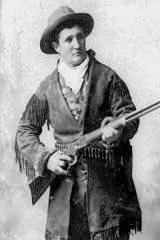 Career choices are never easy, but you really have to learn to play to your strengths. Martha Jane Cannary Burke, commonly known as Calamity Jane, wasn’t really cut out for full-time prostitution, mainly because she looked like a man.

Of course, when you sell your body to whisky-soaked soldiers at the Fort Laramie Three-Mile Hog Ranch, looks aren’t all that important.

Thankfully, Calamity turned out to have a gift for scouting and killing Indians, saving countless frontier drunkards from an unpleasant scalping. Wild Bill Hickok — Jane’s on-off lover — wasn’t so lucky. He was killed playing poker, and Jane allegedly went after his murderer with a meat cleaver.

Pay or Pass? A definite pass on that one. I’d rather have a bar fight with a bear. 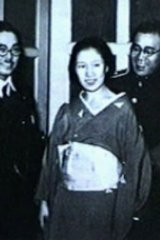 Born in 1905, Sada Abe looked destined to become a respectable geisha. She made it to the lower levels of geishadom, but a bout of syphilis scuppered all that. Turning to out-and-out whoring, Sada took up residence in the brothels of Tokyo. She was a reckless and rebellious little minx, but eventually left the trade to shack up with a man called Kichizo Ishida.

This poor bastard was into some kinky stuff, especially asphyxiation, and Sada wasn’t exactly shy. She was, however, a total nutjob with a jealous streak – never a good combination. To cut a long story short, Sada strangled Ishida to death before chopping off his penis and balls. She kept them in her handbag until her arrest a few days later.

Pay or Pass? If it wasn’t for the whole ball-chopping-strangulation thing, Sada would probably be higher on this list. She looks kind of hot, but it all sounds way too risky. Still, she gets ahead of Calamity Jane. 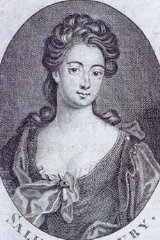 Sally Salisbury began selling herself while still in her early teens. She’d walk the streets of 18th century London “selling pamphlets” – and if any of the local lads happened to have half a crown, she’d happily lift her skirts for an hour-long shag session. At 14 years of age, she entered a high-class brothel where her clientele included aristocrats and lords.

Her temper got her into trouble on various occasions, most notably when she stabbed a customer in the chest over an argument about opera tickets. Having nearly killed the guy, she was fined 100 pounds and sentenced to a year in prison where she died after only nine months – from syphilis.

Pay or Pass? Shaggings, stabbings and syphilis… Unless you really like buxom English wenches, probably best to stay clear. 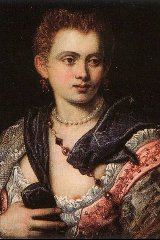 A prim and proper high-class courtesan, Veronica Franco was the type of woman to elegantly suggest retiring to the boudoir before quite literally sucking both the money and the life out of her clients. Despite earning cash on her back, Franco was an educated do-gooder of some note in 16th century Venetian society.

At the age of 20, she was listed in the 1565 edition of Il Catalogo di tutte le principale e più honorate cortigiane di Venezia, a guidebook to the top tarts in Venice. When she wasn’t whoring around with arty types and dodging the plague, the shrew-like Franco wrote poetry and did stuff for charity. Yawn.

Pay or Pass? Apart from being unsuccessfully put on trial for witchcraft (but who wasn’t back then?), Franco sounds like a bit of a bore. Who wants to pay a prostitute just to hear Italian poetry? But she does get 10 bonus points for one of the earliest celebrity nipple slips (see portrait). 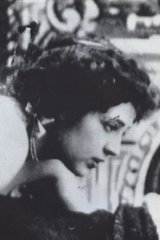 If you were passing through New Orleans in the early 1900s, the Storyville district was the place to be. A red light zone to rival those of Europe, it was a great place to spend all your hard-earned cash.

You could even buy a guidebook to help you navigate the spate of spread legs.

Lulu White ran the top-end Mahogany Hall bordello, a place where high-rolling clients could bed a bit of top-totty. Lulu saved herself for men of power, but her girls were always on hand for a bout of jazz-fueled jizzery.

Pay or Pass? Lulu looks okay, but not the kind of woman you’d want to mess with. Mahogany Hall, however, sounds like an awesome place to hang out for a week or two. 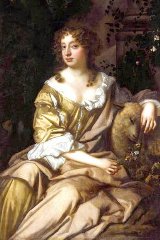 Buxom, bubbly and fond of the King’s balls, Nell Gwyn started life in her mother’s brothel before taking a slight step upwards into the seedy world of the theater.

Before getting her first break as an actress, Nell sold oranges and lemons to members of the audience, often giving those members extra-special attention for a small tip. She eventually found fame as an actress, at which point she caught the eye of King Charles II of England.

Pleased by her large breasts and plump lips, Charles took her as his mistress. When the King died in 1685, he uttered the famous words, “Let not poor Nelly starve.” Touching. Nell died a couple of years later – from syphilis.

Pay or Pass? Good for a giggle and a bit of slap and tickle. Strong thighs, big boobies. Nell certainly deserves her place among the most famous prostitutes in history. 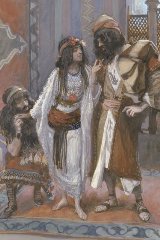 There’s something strangely sexy about Biblical whores, and Rahab comes straight out of the Book of Joshua. Rahab flirted her way to safety during the siege of Jericho, avoiding death by helping two enemy spies hide from the soldiers of her own city. This little act of treachery gave her safe passage after the fall of Jericho.

Apparently, this backstabbing little slut was so sexy that saying her name twice would cause an immediate ejaculation. That’s pretty messed up, especially if you’re just trying to get her attention.

Pay or Pass? Big-nosed but exotic, Rahab was probably quite a saucy thing despite her penchant for religious ramblings. Worth a half-hour session as long as she doesn’t talk – and only if you can call her by a different name. 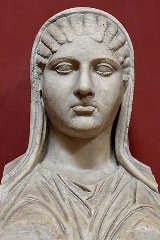 Modern scholars claim that Aspasia was not a prostitute, but what they hell do they know?

Back in 470 BC, Aspasia was tarting around Athens like a right old trollop, running her own brothel and banging Pericles.

By all accounts, she was hot, hot, hot (and a good conversationalist, for what it’s worth).

Pay or Pass? It’s hard to tell by looking at a stone head, but it is quite bangable as stone heads go. If someone came up to me in the streets of Athens and said, “Listen, give me 300 drachmas and you can bone a woman who looks a little like this stone head,” I’d probably pay. 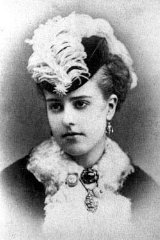 Cora Pearl was a classy little temptress. Born in England in 1835, she received an education in France before returning to London in pursuit of wealthy men. Not your average gutter whore, Cora had the looks and social skills to draw the gaze of some of Europe’s wealthiest gadabouts.

Of course, dancing naked on beds of orchids, bathing naked in champagne and turning up to dinner parties covered in nothing but whipped cream was a good way to be noticed. She boned half of Europe’s royalty, earning herself a small fortune in the process.

Pay or Pass? Sounds expensive. Cora was a courtesan rather than a prostitute, so you’d have to pay big bucks for a session. However, her addiction to gambling often left her with bills to pay, so discounts were sometimes available. 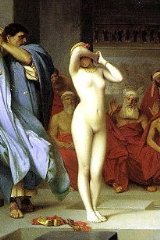 Phryne was a hetaera, or courtesan, of Ancient Greece. Educated, sophisticated and aromatic, she didn’t accept payment directly but – let’s not kid ourselves – some poor bastard always has to pay in the end. Her mesmerizing beauty made men throw themselves at her feet, plying her with “gifts” and making her a wealthy woman in the process.

Things took a turn for the worse when she ended up on trial for profaning a religious ceremony. Her lawyer was struggling, but then he had a total moment of inspiration: he ripped open her robe, her tits fell out, the judge was delighted and promptly set her free. Genius.

Pay or Pass? The “gifts for favors” thing is a bit annoying; hourly fees are much more straighforward. That said, Phryne was a fine figure of a woman and worth the effort. She’d also make a great client for defense lawyers. 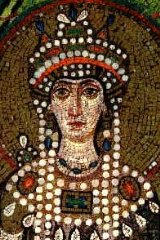 Few women, if any, can match Theodora’s rise from cheap slut to empress and eventual saint. Born c.500 AD, the young Theodora started out servicing members in a Constantinople brothel. She soon became an “actress,” delighting crowds with weird sex-shows complete with rampant after-parties.

One of her greatest crowd-pleasers was sprinkling barley on her bush before having a flock of lucky geese peck her clean. Weird.

Anyway, she started traveling around with various men of power before ditching her “acting” career and shacking up with Justinian, heir to the Byzantine throne. He became Emperor, she became Empress, everyone was happy, and then she died and became a Saint.

Pay or Pass? Definitely pay, no questions asked. She was smart, attractive, witty and kinky. And who’d turn down a lap dance from a Saint?

And the Number One Famous Prostitute in History is… Catherine Walters 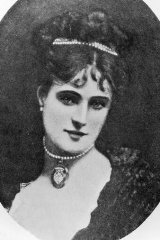 Sexy, smart, elegant and discreet, Catherine Walters was a truly sensational courtesan. Born in 1839, she became one of the great fashion icons of Victorian London, so much so that crowds would gather to watch her ride her horse through Hyde Park.

Her professional demeanor and stunning looks made her highly sought-after among the philandering aristocracy of Europe, and her doting clients included the future King Edward VII and Napoleon III. She retired as a wealthy and well-respected woman, and died at the age of 80.

Pay or Pass? The only danger here is the distinct risk of falling in love. Beautiful, intelligent and discreet, no married man could wish for more. God bless you, Catherine Walters.