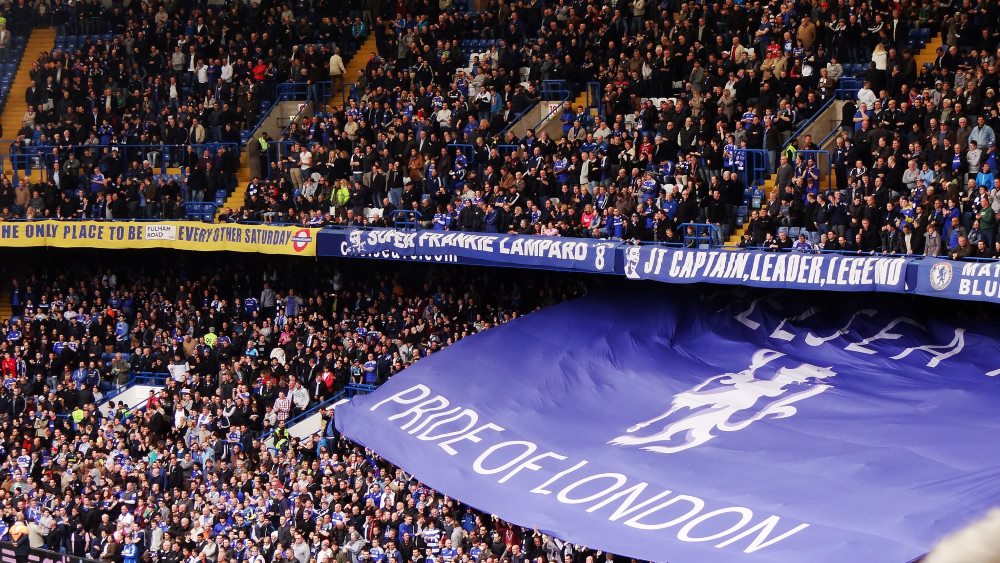 Chelsea fans. Not all of them are soccer hooligans, at least not any more. Photo by Ben Sutherland, flickr.com.

During my recent trip to the United Kingdom, I ventured into the heart of a distinctly British subculture: soccer hooliganism.

Soccer is a national obsession in England, inspiring both great loyalty and great rivalry among supporters of particular clubs. Hooliganism — the dark side of the sport — is the extreme result of these powerful emotions. In order to understand the hooligan mentality, I arranged an interview with a self-confessed English soccer hooligan and life-long Chelsea FC supporter.

(Note: for clarity, links have been added to certain words that may be unfamiliar to an American audience)

Would you like to introduce yourself to our readers?

Well, my mates call me Turtle cos I had a turtle as a pet once. That was before a gypo by the name of Roy Knackers broke in to my pad and blew the bastard up with a stick of dynamite. It was a revenge event cos I once boned his bird, a dirty slag called Thyme. I regretted that one, I really did.

Not cos of the turtle much, he was boring, but I got a nasty case of the itches after doing that hippy skank. Anyways, me mates call me Turtle. Some of them call me Turd for short.

Okay… So, how did you become a soccer hooligan?

Firstly mate, if you call it soccer one more bloody time I’m gonna break both yer legs. Got it? You Yanks are a dumb bunch from wot I’ve seen, but nothing gets me more riled than “soccer.” I mean, you lot have got your little American Football game, wot is basically rugby for pussies, and in that game you use yer hands. So why not call that American Handball and call football, the most popular game on the bloody planet, football. Dumb bloody Yank tossers.

Sure, no problem. OK. Turtle, how did you become a football hooligan?

It’s a family thing really, a bit of tradition like. Uncle Arnold and me Dad was always followin Chelsea round the country, duffin up punks and gays and fancy nancy boys. When I was bout four years of age, Uncle Arnold told me Dad that I was just about ready, so they started takin me with em. I had my first pint at the age of six, my first punch-up at nine and my first shag at 11. I never looked back really, I enjoyed it and I still do. It’s somethin to do, innit?

As a Chelsea fan, do you believe that your hooligan activities are beneficial to the club itself?

Listen mate, wot I do is a hobby and it don’t hurt no one, at least not those who don’t ask for it. The plod enjoy a scuffle as much as the next man, and the foreign types shouldn’t be here in the first place. Most of them are Arsenal anyway, so I don’t think anyone really cares much. Bunch of plonkers.

Would you describe yourself as a racist?

A racist? Not me, mate. I just don’t like all these wogs and pakis and islamics and wot-not coming into our country and stealing our jobs. I do like a good curry, but that’s about it really. And I grab a sly chinky takeaway sometimes. But I’m not a racist.

But Chelsea FC has players from all over the world, of all races. Is supporting the club not a double standard?

Are you thick or somethin? Chelsea is Chelsea. Chelsea is as English as the Queen is, and our lads are English. Look at Drogba and Kalou. Big black fellas from the dark depths of Africa, but they are Chelsea, ergo they are English. You got that, or you need a bit more explaining done outside?

Sure, no problem. Finally, can you see yourself being a football hooligan for the rest of your life? Or do you think you will move on at some point?

Blimey, you really aren’t gettin the gist of all this are you? You Yankees are dumber than wot I thought. I’m Chelsea til I die. Stamford Bridge is like my home from home, and what kind of bollock-fiddlin arse-wipe turns his back on his turf and his compadres?

Look at those Chelsea Pensioners. I see women cooing like little doves when they see those old fellas at the Bridge, “Ooo, look at the sweet old Chelsea Pensioners in their scarlet coats, so sweet ooo, ooo, ooo!” Stupid tarts shouldn’t be at the game anyways, bad enough without hearing all that shit.

Those Chelsea Pensioners ain’t stupid you know, they love a good old fight. I once saw three of them take on eight or nine Tottenham lads. Tore them to pieces, they did, sent the little pansies running back to North London in no time. Wot I’m sayin is, even when I’m 98 I’m not gonna walk past a Millwall lad and say “Oh, good afternoon, have a lovely day mister Millwall fan.” I’ll do what I always do: Give him a stern look and shout out in no uncertain terms wotsoever, “Oi, tosser, see you after the game you snivelling little wanker!”

Farewell to an English Soccer Hooligan

We called an end to the interview at this point. Turtle lives with his grandmother, Doris, who had kindly prepared a traditional English meal of fish fingers and chips (french fries) for us both. We sat eating in front of the TV watching “Chelsea FC Season Review 2007/2008” on DVD.

Turtle’s grandmother then showed me her Chelsea FC tattoos, all 28 of them, after which we said our goodbyes. It was an interesting cultural encounter. Turtle has invited me to watch a Chelsea game with him as soon as his house arrest ends in September 2011.

Turtle asked me to include this photo in the article, which he describes as “The perfect piece of Chelsea muff.” Whatever that means.