Tips for Talking to Poor People 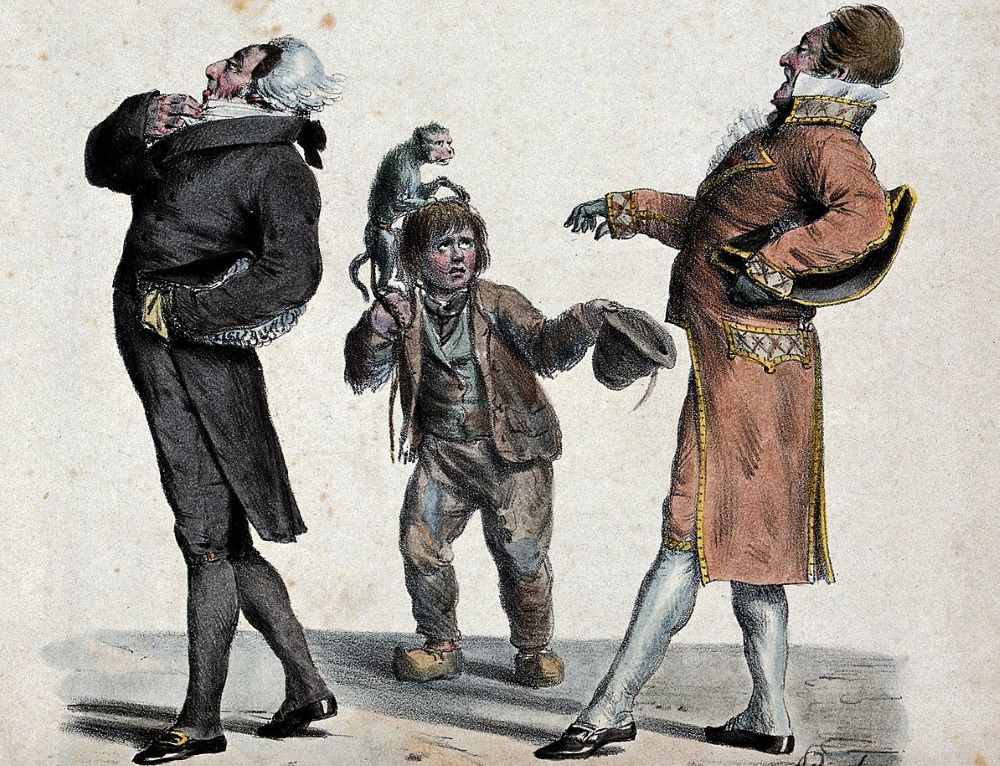 Poor people can be found everywhere, despite the best efforts of high society. And, whether you like it or not, there may be times when you are confronted by a poor person and it engages you in conversation.

The more adventurous among you may even wish to learn more about the poor by deliberately walking among them, not unlike Henry V’s nighttime stroll through his ranks of common soldiers and plebeian Welsh longbowmen.

Whether you encounter them deliberately or not, here are some important things to remember when talking to the poor.

When talking to poor people, speak slowly and clearly. Avoid all long words and expressions that may be unique to your own social circle. You may be able to form a greater bond with the poor by using some of their own lingo or by speaking in a guttural, uncouth manner. Speak at a higher volume than you are accustomed to, as the poor tend to shout, and are confused by a smoother tongue.

Find Some Common Ground with the Poor

This may seem like an impossible task but, believe it or not, you may share some common ground with poor people. They are, after all, humans just like us!

Talk about simple things such as the weather, popular music and dogs (for the latter, however, avoid talking of show breeds and foxhounds, as you will likely confuse rather than amuse). If you are familiar with any ghastly popular-culture celebrities, then throw some names into the conversation. Poor people enjoy this. I believe Taylor Swift is one such celebrity, as is Jon Jon Jovi.

Do not mention any highbrow or classic artistes such as Bach, Damien Hurst or Marcel Proust. Poor people will simply not understand.

While you are probably earning at least £400,000 annually (that’s about $518,000 for any vile Americans out there), most poor people are earning only a fraction of this sum. Some, incredibly, do not even work at all and have no savings whatsoever. It is therefore unwise to talk about money. The poor person may feel uncomfortable or embarrassed by both its failure to earn and overall social worthlessness.

The general attire, demeanour and odor of poor people has not changed for hundreds of years.

An unfortunate side effect of poorness is a low level of personal hygiene.

A poor person’s diet consists of fast food and cheap whisky, and that’s at the higher end of the scale. They rarely have money for cigars or snuff.

The poorest poor people eat almost anything they can find, including items found in other people’s trash, such as apple cores, truffle pips, Brie rinds, champagne corks etc. This diet leads to bodily problems such as gas and rancid, stale breath.

If they wash at all, poor people wash themselves in rivers. Sadly, these rivers have already been polluted by the very same poor people, creating an unfortunate vicious cycle that leads to whiffy lower-classes and stinky city rivers. It’s desperately unfortunate, it really is, but thankfully it’s confined largely to the city and not to our beautiful estates.

Most poor people are thieves. Indeed, many financially secure people were once poor but they became stable through thievery rather than the more noble tradition of inheritance.

With this in mind, it is imperative that you keep an eye on your possessions while talking to the poor. Try not to look overly concerned, as this may unsettle the poor person; in the worst case scenario, it could provoke an attack. You may wish to have your chauffeur standing nearby with a 12-bore shotgun in case of problems.

Never touch a poor person, neither out of curiosity nor through the affectionate advances of the poor subject itself. If the poor person does try to shake hands with you or, God forbid, embrace you, step away quickly. It will be difficult to do this in a respectful manner but you really have few options in this instance. Always remember that your personal safety is paramount when dealing with the poor.

By following all of the above rules you should hopefully enjoy a rewarding, if not entirely pleasant, experience. The whole engagement should prove memorable both for you and, even more so, for the poor person involved.