Is World Peace Possible and How Can it Be Achieved? 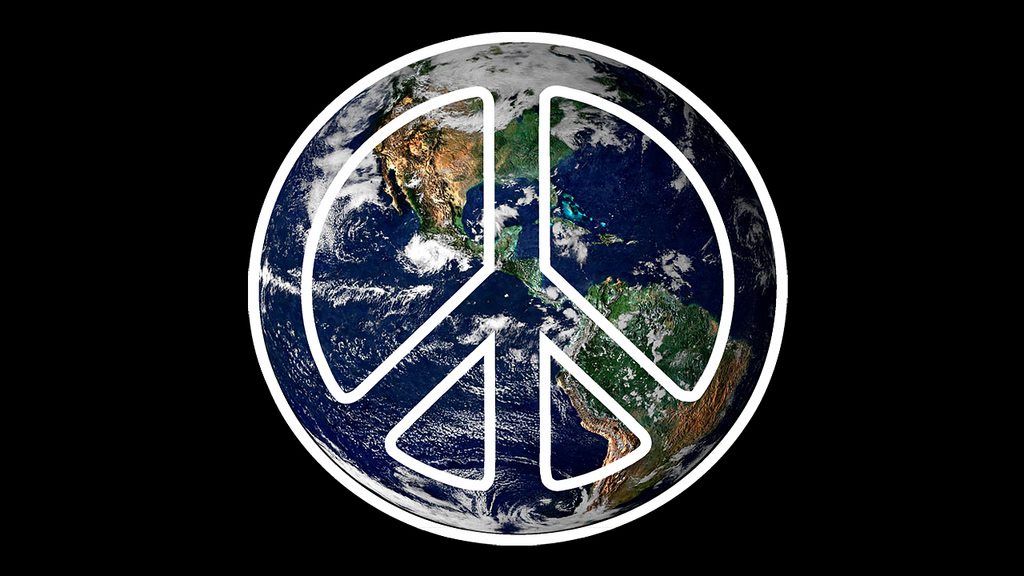 Is world peace actually possible in a world full of conflicts? Yeah, man, of course it is, we just need to all get along. Image by Ala Fernandez, flickr.com.

Is world peace possible? The fact that the question needs asking is kind of sad. Of course it’s possible, man, it’s as possible as dreaming, it’s like air.

We breathe in peace every day, sometimes only for a moment when we wake up, other times for like a whole day and maybe the night too if we sleep well, brothers and sisters.

But what are we gonna do to make it real? Achieve it, breathe it, swim in it like fishes? We need to unfurl the love pipe, and lay out a picnic for the world.

Just hug and touch each other and feel skin and realize that we are all the same, the same legs and arms and eyes. Touch a woman, touch a man, it’s all good.

Last time at Burning Man, I knocked over a girl on stilts, and she fell into the sand. I said sorry, and she screamed. I hugged her and she carried on screaming, so I gave her a kiss. She punched me in the face, but the whole vibe was so decommodified that it all worked out fine. Love, man, just love.

Smoke for Peace, Get High

They say this shit’s illegal in some places but what do they know, they’ve never been as high as the mountain tops. The rule-makers are not the peace-pipe shakers, they’ve never smoked a big ass bong, never seen an octopus kiss the sky, how can they know? We can’t fight for shit man, we’re too damn high for violence. You know? It’s world peace. And I mean, my dad’s a lawyer, so he’s got my back, man.

I don’t mean sing just like singing, you know, not just like making tunes with your mouth man. I mean sing, make poems, paint pictures, paint a naked woman’s body, that shit’s double-sweet like fresh candy sugar, brother. You are the captain, sail that ship into the sunset, man, and drop off the edge of the world. Take the yacht for a cruise and see how the world really is.

This is the connection, this is it man it’s not just about babies it’s about connection. Love and be loved, make love with them all, be the love muscle.

So your therapist says you have an addiction to love making and drug taking, you say “well look man, it’s not about the who or the why it’s about the way, man.” And when they say no, like, just change your therapist, or go to a yoga retreat in Vermont, that shit’s dope sisters.

It’s like Michael Stipe, that cat is a cool brother because he has sex with humans, there’s no man or woman, male or female, it’s just connection.

It’s like Wigwam says, that sharp hipster on the corner, “Make love more, less time for war.” Man, that guy, you know!

We can’t use bombs man. We have to think about the environment. Sound pollution, smoke pollution, toxins and chemicals — who knows what people put in bombs?

Peaceful protest is power, just like Mahitma Gondi said man, that cat was so small, like a little bald kid, but he knew. I read the first chapter of his book and it was beautiful. Peace is possible people, but we don’t need to be physical warriors.

We are the air warriors, gas warriors man, it’s physics of the spirit state.

One day humans won’t eat the animals, we won’t chop down trees or have soldiers or guns, we’ll make love with each other, with the Christians and Jews and Islamics and North Korea, we’ll make love with Kim Jong-un and Donald Trump man. We’ll lie naked with Hilary and Bernie under a big duck-down duvet in the sun, eating hummus.

All together in one big bed with John and Yoko, sisters and brothers all hugging and kissing and getting warm, that shit’s crazy man. Love to love, be love, no borders, no competition, just one big love session on board the skin train baby. Yeah. Oh man. This is freakin’ me out. When I graduate from law school, I’ll work pro bono for poor people, man, and it’ll feel like I’m blessed.

Is world peace possible? Sure it is babies, we just gotta let life roll.