Donald Trump and the Isolation of Atlantis: The World Reacts 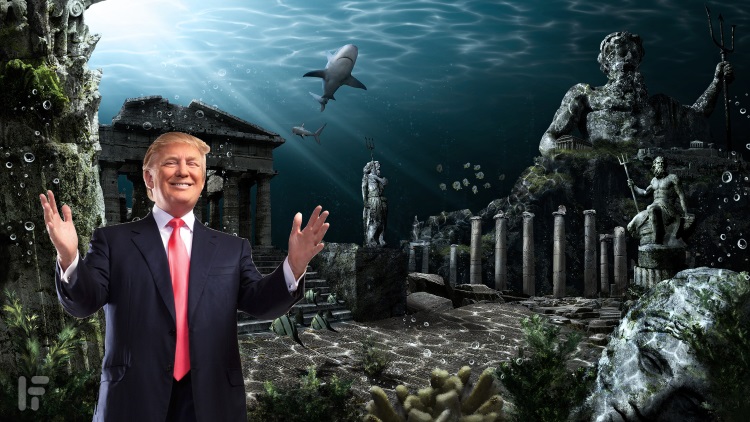 Protests have erupted in Atlantis following Republican presidential candidate Donald Trump’s pledge to build an impenetrable glass dome over the submerged city-state. Trump plans to ensure no Atlanteans enter the USA illegally and that all Atlanteans currently residing in the USA will face immediate deportation should Mr. Trump win the presidential election in November. Reactions to the plan have been swift and varied.

“I’m going to build a big, beautiful glass dome, like the most beautiful fish bowl you have ever seen. It’s going to be big and great and beautiful and we’ll put it over Atlantis. Atlantis is a great place — beautiful people, just beautiful — but they can’t come into our country and take our jobs and live in our lakes and our rivers and our water hazards. And some of them, not all of them but most of them, are criminals, they’re here illegally. They are bringing tridents, and bringing clams, and getting our carpets wet. Some of them are probably rapists, although I don’t know how that would work exactly. My first task as President, in the very first minute of the first hour of my presidency, will be the deportation of every Atlantean back to Atlantis. And there will be no amnesty for Atlanteans in our great country.”

Namor the Sub-Mariner, Spokesman for Atlantis and the Underwater Realm:

“I don’t quite know where this antipathy toward Atlantis comes from. We Atlanteans typically keep to ourselves in the depths of the ocean. Some of us, it is true, occasionally stray into territorial waters belonging to the United States of America, or even venture upriver to explore its lakes and swamps. But we don’t cause any harm. We sincerely hope that this discussion does not progress, but if it should, we hope it can continue in an atmosphere of productivity and love. And, ideally, under water.”

“Hell yeah, Trump’s gonna send them all back to Atlantis and they’re gonna stay there man, forever. I say send ‘em all back on a submarine, a yellow fuckin’ submarine made in the USA! I ain’t gonna lose my job to no goddamn aqua man, hell no! Build the Dome! Build the Dome!”

Donald Trump, when asked about the technical details of the deportation:

“It’s simple. We’ll round them up, with nets if we have to, and put them on one of our nuclear submarines, the biggest one we have, and take them all the way back to Atlantis. Not just to the sea, but all the way back. Then we’ll drop the dome and America will be great again. And safe. No more rapes.”

Hilary Clinton on the Atlantis Dome:

“His [Trump’s] new plan is both foolish, unrealistic and entirely unnecessary. No Atlantean should be kept against his or her will from leaving Atlantis. It’s entirely unethical and reeks of segregation. Atlantis is older than any land-based city on this planet and the residents of Atlantis should be allowed free rein of the oceans, so long as they do not interfere with humanity’s sacrosanct right to plunder the seas. And the ocean floor.”

Vladimir Putin on the Atlantis Dome:

“The Atlanteans have never been friends to Russia. Trump is completely correct. Let them rot in his big fish-tank dome. They are all miserable whale fuckers.”

Donald Trump, when asked who would finance the construction of the dome:

“I’ll make Atlantis pay for it. Sure. If any Atlantean wants to leave Atlantis, he’ll have to pay an exit fee and a re-entry fee. A big fee. These fees will pay for the dome, believe me. What other options will they have? They can’t just swim around down there and starve to death. And if anyone can build a great big glass dome under the ocean, it’s me. Believe me, I know how to build things.”

North Korea, when pushed for an opinion about Trump’s Atlantis Dome:

“Our Glorious Leader has instigated the immediate development of an interoceanic missile system of such complexity that it will penetrate even the strongest underwater glass dome. It is three hours away from completion.”

Queen Elizabeth II of the United Kingdom, via Snapchat:

“One must always sympathize with a fellow monarch, whether he be of the land or of the sea. And while one has never had the good fortune to meet King Cleito XVIII of Atlantis in person, due to the quite literal gulf that separates us, one nevertheless offers one’s condolences at such a trying time.”

Donald Trump, tweeting about Namor the Sub-Mariner, Spokesman for Atlantis and the Underwater Realm:

“Have you seen that guy Namor? His gills all flappy. I like to call him Stinky Namor. I bet he #StinksLikeFish #VoteTrump.”