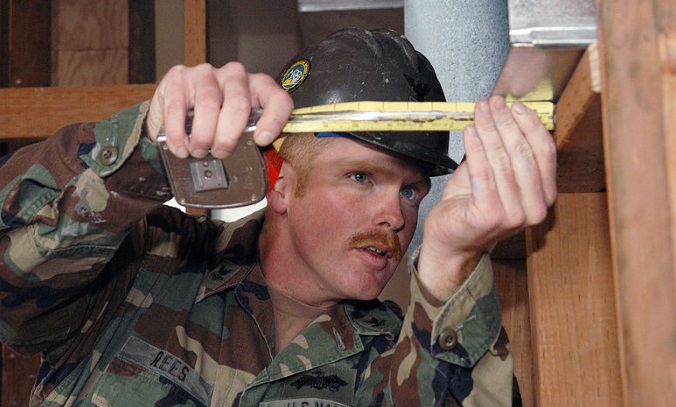 In the photo above you can see Builder 2nd Class Nicholas Rees of the U.S. Navy. He is building a sound-proof interrogation room for the CIA, which will help the USA extract information from dissidents. He is using inches.

How big is an inch? What is the exact size of an inch to scale? How does an inch compare to a finger length? What is the diameter of an inch? And what is its history? All excellent questions, and here you shall find the answers…

The measurement known as “inch” was first invented in Britain during the 5th century to define the length of a shrew’s tale, which was approximately an inch in length. Shrews were used as currency in English villages, but rather than weigh each shrew, villagers could determine if the shrew was an adult – and therefore at its full weight – if its tale was an inch or more in length.

The inch was invented for a second time in France some two hundred years later, as a measurement of the girth of horse meat sausages (bite de cheval charnue), the most common food source in France at the time, as it is today.

In the year 1324, King Edward II of England requested the first ever investigation into the standard length of an inch. Three men were tasked with defining the true length of the inch: Percy Fallon Fry, Gregory Plimp and Sir Blackmore Brest of Bream.

Fry concluded that an inch was “the length of the mid-section of an adult male’s third finger, provided that the man is no shorter than a mule and no taller than an elk.” Plimp defined an inch as “three nipples, each smooth and round, of classical size and uniformity, placed side by side on a platter.” Sir Blackmore, after seventeen weeks of research, declared an exact measurement impossible, as “only an inch can measure an inch, and therefore we must accept it as it is.”

None of the standardizations were accepted by Edward II. Sir Blackmore was beheaded.

How Long is an Inch Today?

Over the centuries, the length of an inch has varied from 9 mm (the French “small inch”, or petit pouce) to 38 cm (the Irish “heavy inch”, or orlach mór trom, which was used for measuring the depth of air).

If you place your face against your computer monitor with the tip of your nose gently touching it, an inch is this long:

If you are standing exactly seven steps back from your computer monitor, an inch will look this long:

Inches have largely been replaced by centimeters and meters in most countries, in a system known as the metric system.

The British brought the inch to the United States in 1607, along with a gentlemanly demeanor, syphilis and the color red. Ever since then, the USA has been one of only three countries to officially retain the inch, along with the equally retarded nations of Liberia and Myanmar. The British still use the inch unofficially, mainly for measuring pork chops, penises and TV screens.

Going against its own national standards, NASA banned the inch completely in 2006, calling it “abhorrent.” The inch has been forbidden in China since 1977, and its use is still punishable by up to three years in prison or nine months forced labor at the Haerwusu open-pit coal mine in Inner Mongolia.