Are the Paracas Elongated Skulls of Peru Really Alien? 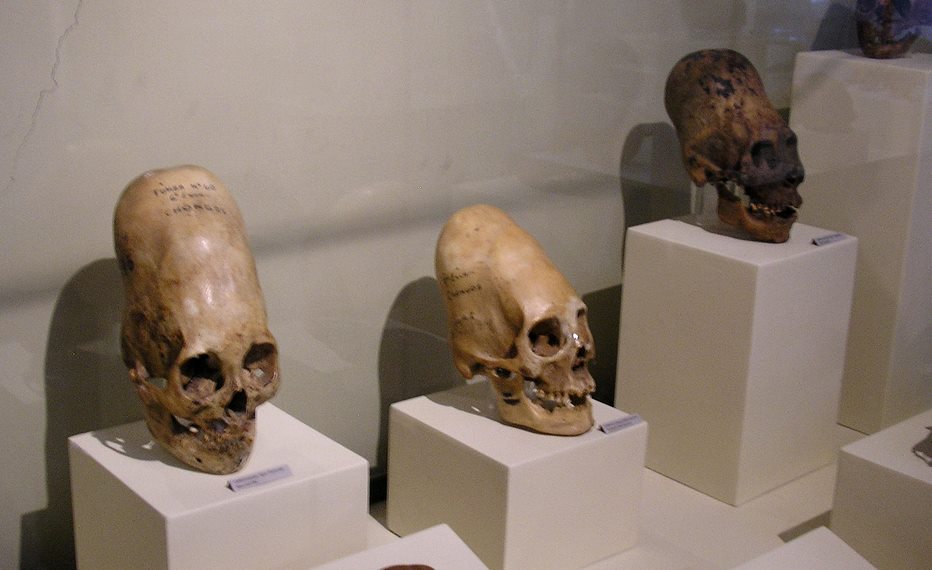 Are the Paracas elongated skulls alien? Are they non-human? Photo by Marcin Tlustochowicz, flickr.com.

The internet has been abuzz lately with talk of the unusual Paracas elongated skulls found in Peru. In order to uncover the truth behind these strange skulls, we sent in our most qualified content producer, Dan Smithies. Smithies studied history for one year before shifting his attention to theater studies, but he still occasionally reads books about history and is a big fan of science fiction and fantasy.

Now, after a few hours of in-depth research online, Smithies uncovers the shocking truth behind the Paracas skulls…

The History of the Paracas Elongated Skulls

During the late-1920s, a Peruvian archaeologist named Julio Tello dug up a whole bunch of elongated skulls in a little place called Paracas in southern Peru. Tello was a genuine — and by all accounts intelligent — archaeologist, so he naturally concluded that the skulls were the result of head binding, a process of cranial deformation that is actually fairly common across the globe.

Why people would want to deform their craniums is beyond me, but people often put disks through their ears and spikes through their cocks, so it’s no real surprise.

Anyway, it was only later that a group of pseudo-archaeologists started poking around the skulls looking for links to ancient astronauts and all that kind of stuff.

Two of the key proponents of these alternative theories are self-proclaimed “rogue archaeologist” David Hatcher Childress and a man by the name of Brien Foerster, an expert in canoe paddles (or something equally as random) who runs a little tour agency for gullible idiots visiting Peru.

If you think that sounds dubious, you’d be right. Both Childress and Foerster, however, have appeared on the History Channel’s Ancient Aliens, which makes them experts on aliens that are ancient (kind of like how Chumlee is an expert in antiques). This, of course, is exactly the kind of expertise needed in Paracas.

It is clear that Brien Foerster has never accepted the skull binding theory. In order to prove his alternative standpoint, Foerster highlights the abnormal volume of the skulls, some of which have a cranial volume “2.5 times larger than a conventional modern human skull.”

Even a simple visual analysis makes it easy to see the alien nature of the elongated skulls found in Paracas, Peru. Here is an artist’s impression of what these aliens would have looked like: 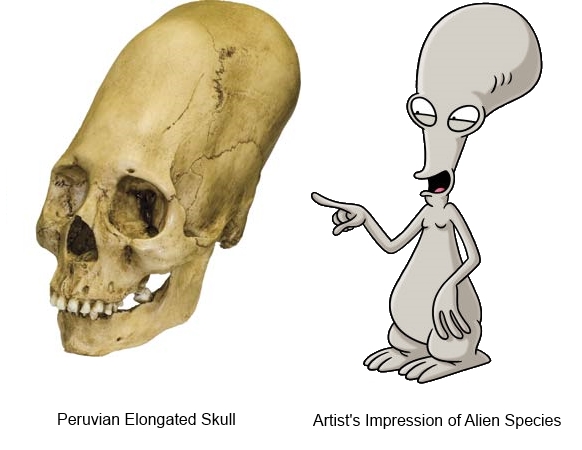 Not content with that, Foerster then got some cash together through donations from his mainly dumb-as-fuck Facebook followers. With this cash, he had skull samples sent away for DNA analysis.

Rather than sending the samples to respectable and reputable analysts who work for “The Establishment” (and who would definitely have charged more), the samples were sent to Lloyd Pye, a pseudo-scientist and paranormal researcher famous for his work on the “Starchild skull,” a skull he believed to be an alien-human hybrid (it wasn’t). Pye then handed over some samples to his analyst for testing.

His analyst was Dr. Melba Ketchum, a veterinary doctor who believes in Bigfoot.

Fair enough. We all know that cutting-edge investigation can’t be hindered by peer review or the academic system, or hampered by widely accepted scientific and historical fact.

There was obviously only one result coming from these tests: According to Foerster, the samples revealed “mutations unknown in any human, primate, or animal known so far.”

That can only mean one thing: Aliens.

The Development of Alien-Human Hybrids in Peru

Now that we’ve established beyond any doubt the nature of these alien — or alien-human hybrid — skulls, we must try to fill in the events leading to their creation.

The aliens probably landed on the elaborate runways that form part of the Nazca Lines. While in Nazca, it is probable that alien abductions occurred — abductions that may have included rape. Either via direct alien-human intercourse or through genetic splicing, various Nazca women would have found themselves pregnant, sore and traumatized.

Fleeing in disgrace, these women gave birth to alien hybrids among the Paracas culture. Many of the newborns would have died, accounting for the numerous infant burials. Some, however, would have reached maturity, their skulls growing to incredible sizes that were — and are — obviously non-human.

Tired from their journey through space to the Solar System and planet Earth, it appears that the newly arrived aliens did little to advance the development of the Paracas culture (apart from giving some of them abnormally large heads).

The Paracas civilization did, however, produce excellent embroideries and textiles, some demonstrating unusually complex weave structures as well as advanced plaiting and knotting techniques.

It would appear, therefore, that the extraterrestrials treated Paracas almost like a retirement home, a place where they could sit around all day weaving and knitting and occasionally burying someone.

What Type of Aliens Came to Peru?

According to Foerster, the tests reveal that “we are dealing with a new human-like creature, very distant from Homo sapiens, Neanderthals and Denisovans.” Christ only knows what a Denisovan is, but the skulls definitely don’t come from them.

So we know we are dealing with something extraterrestrial in origin, but what type of being are we talking about?

I haven’t had the chance to examine the DNA myself, but I believe the Paracas elongated skulls are almost certainly Nephilim hybrids. Alternatively, we could quite realistically be looking at direct evidence of former contact with another type of superior being imbued with angel DNA. 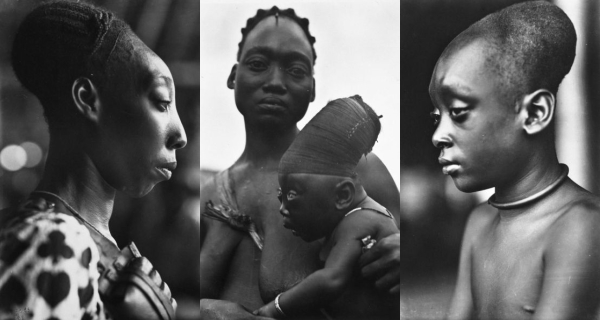 This type of known cranial deformation by head binding is obviously not what happened in Paracas. Yep, 100% not what happened at all. Photos by Tropenmuseum of the Royal Tropical Institute (KIT), Wikimedia Commons.