When I first came across an advert for Life Technology’s Tesla Shield, I was both intrigued and skeptical. Does the Tesla Shield work, I wondered, or is it just another scam? I had a look at the Tesla Shield website (and a few other Tesla Shield / EMF protector devices), and was immediately struck by the manufacturer’s claims.

As I was in the midst of a mid-life crisis (combined with an intense fear of alien abduction), I decided to purchase the Tesla Shield, a small device that can be worn about the neck. The following is an account of my one-week testing of the Tesla Shield device.

Today (a Sunday), I decided to test the Tesla Shield against EMF radiation. According to the Life Technology website, the shield offers protection against harmful electromagnetic radiation. I used my wife as a control subject, sending her picnicking in the countryside with her best friend, Big Jim (away from all EMF sources).

I, meanwhile, spent the day subjecting myself to EMF radiation (with the Tesla Shield safely hanging from a string around my neck). I started the day by taping two cellular phones to my head. I then spent one hour hugging the microwave oven (on maximum setting) while playing PlayStation. I then drove to the nearby transformer substation. I climbed the security fence and spent four hours sat on top of the main transformer (where I shaved using my electric shaver).

It was dark when I returned home. My wife returned shortly afterwards. Interestingly, I was feeling surprisingly well despite my day of exposure. My wife, however, was feeling particularly tired. It was only when I suggested making love that she revealed she had “a terrible headache.” She is now sleeping – it seems that the Tesla Shield offered a surprising level of protection, especially when compared to the control subject’s status. 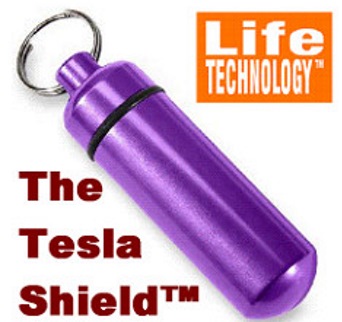 Today (Monday) was the perfect opportunity to test Life Technology’s claims of enhanced inner peace using the Tesla Shield. Let me first state that I hate my job. It is a typical cubicle job, mundane and colorless. I am also subjected to bullying from coworkers and my boss, Gustav.

I made a checklist of Tesla Shield claims and noted my observations at 4:49 pm, shortly before leaving the workplace:

I went to work again today, intent on testing some of the Tesla Shield’s other properties, namely: healing, increased awareness, and releasing blockages.

Sadly, the Tesla Shield did not seem to have a great effect. According to Life Technology, the shield “awakens and enhances psychic and healing abilities.” I ran a series of psychic prediction tests and a number of healing attempts. The following results were the most notable, despite an overall lack of success:

Both women later reported me to Gustav, claiming sexual harassment. He has suspended me from work for a week. The Tesla Shield should “expand consciousness and awareness” – had it done so, I would like to think I would have been able to avoid the suspension (pending investigation). Result: FAIL.

The only positive from today was the releasing of blockages. Prior to today, I had been experiencing stomach pains due to constipation. At precisely 3:52 pm, I shed an impressive load in the cafeteria toilet. Physically, I am feeling great. 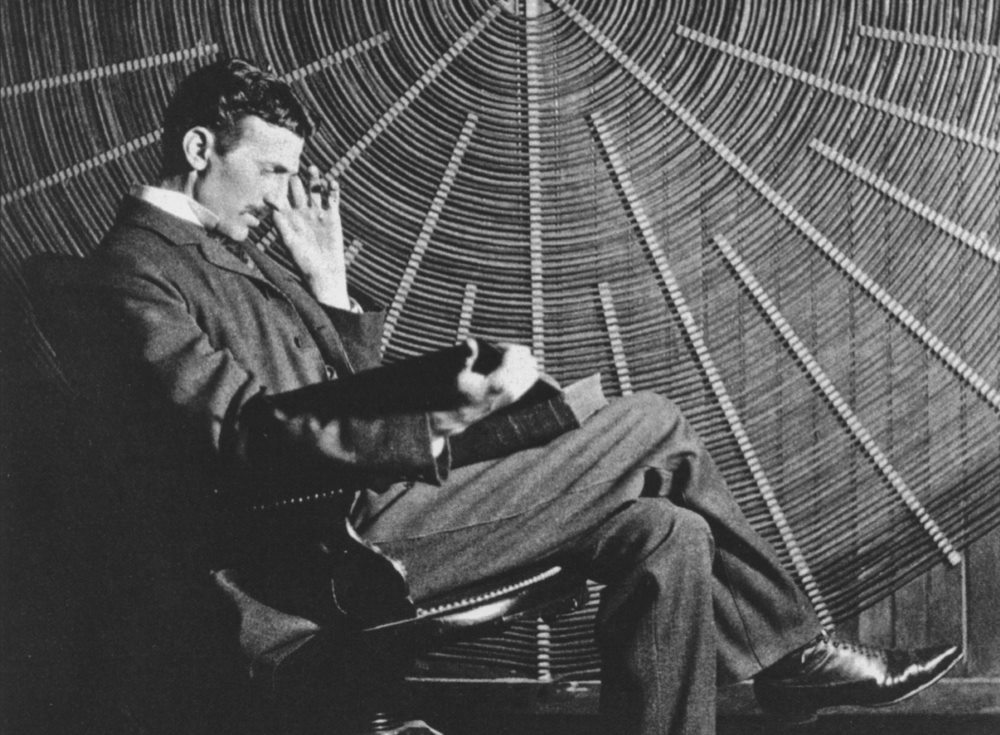 The great man, Nikola Tesla, in front of his original Tesla coil transformer in his New York laboratory.

Having no work commitments today due to my fortuitous suspension, I tested a second set of Tesla Shield claims, most of which are physical in nature. I made a list of claims from the Life Technology website and set off on a brisk cross-country trek. Here are my notes:

I reached a small village at approximately 5: 20 pm, whereupon I took the bus home. Surprisingly, the journey took only 15 minutes. I continued my testing at home:

I am not a particularly religious man, so the Tesla Shield’s spiritual powers are somewhat hard to test. However, I spent much of today trying to pray, meditate and manifest. Sadly, I noticed no increased connection to the “Divine Source,” a claim made by Life Technology. Furthermore, my attempts at astral projection, lucid dreaming, ascension and synchronicity were all disappointing.

I probably just need to practice and learn more about these procedures. I also tried to stimulate my third eye chakra, but I think I may have been doing something wrong. It was a wholly unpleasant experience.

The Tesla Shield is supposed to be “suitable for adults and children of any age.” Today, therefore, I decided to let others try the shield.

I have no children myself, so I gave the Tesla Shield to my neighbor’s child, Ralph. Ralph is a shy boy, and today he went to a friend’s birthday party. When he returned, he informed me that the Tesla Shield did not work.

Apparently, he drowned his friend’s new kitten in order to bring it back to life using the device. He failed, blaming me for the trouble it caused. His father then came to my house and told me, in no uncertain terms, to stay away from his entire family. Overall, not a great success.

Later, I gave the Tesla Shield to my wife. She had arranged to go to tango classes with Big Jim, so she took the device with her. Upon her return, she informed me that it was a great device, very smooth and just the right size. Slightly cryptically, Big Jim told me it was the best butt-plug he had ever used. I am not sure what he meant (maybe he had blockage issues?), but both reactions were undeniably positive. Big Jim gave me back the Tesla Shield – I placed it around my neck immediately, instantly feeling a surge of energy.

The device is supposedly “beneficial for pets, animals and plants”, so I tested the shield on my cat, Willow. Willow was not impressed, first hissing at the device before calmly walking away. No significant effects noted.

Today is the final day of my Tesla Shield review. According to Life Technology, the shield can be used as a pendulum with four distinct functions:

Sadly, I am unfamiliar with these types of pendulum usage. I did try dowsing, but with little success. I spent six hours in a nearby meadow, but failed to detect any sources of water, oil, precious metals, gemstones or Ley lines. I did find a hubcap from a Buick Skyhawk.

Does the Tesla Shield Work?

I am aware that some people have labeled the Life Technology Tesla Shield a scam. I am happy to report that I am not one of those people. My week of testing had its ups and downs, but overall I have been deeply impressed with the Tesla Shield’s powers. I am feeling strong, healthy and centered – my wife also seems to be in a particularly good mood.

I still feel that I have yet to experience the full powers of the Tesla Shield, so I am confident that the best is yet to come. In conclusion, I would certainly give the device my seal of approval, despite the high cost.

Thank you, Life Technology, for creating the Tesla Shield and reinvigorating my life. Furthermore, I no longer live in fear of alien abduction.