Interview with a Male Streaker 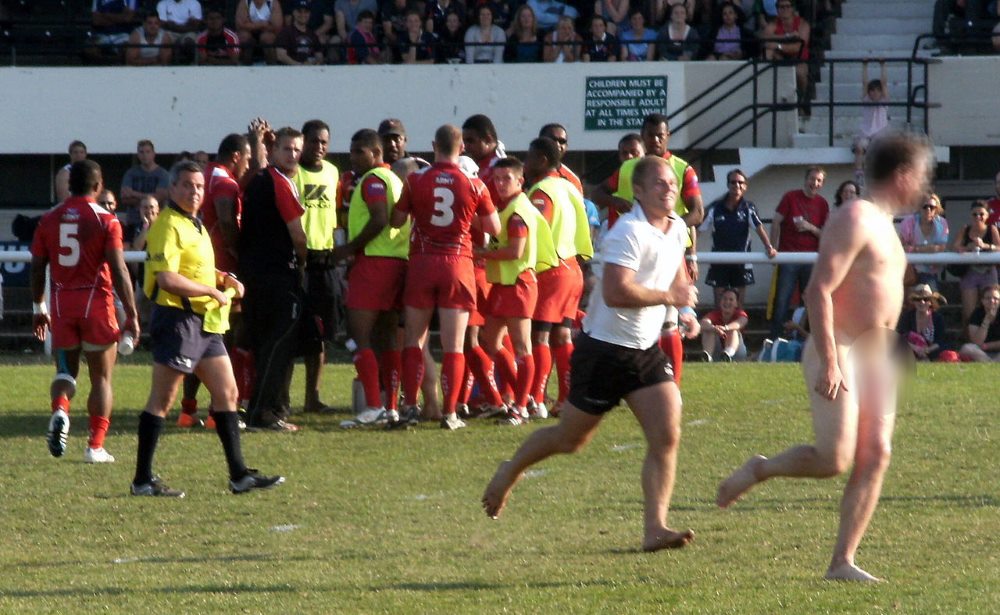 Mr. G streaking in London in 2016. “I’m not as toned as I used to be, but I’m still just as quick” he says. Photo by Mark Ahsmann, Wikimedia Commons.

Mr. G is a professional streaker. He is highly regarded in the streaking community and looks set to have a increasingly bright future despite already having an impressively long streaking career. Few men have accomplished such a large number of notable streaks.

His identity is currently a delicate subject. Therefore, he wishes to remain anonymous during this interview.

Mr. G, how did you become a male streaker?

Well, I guess it was destiny. I never felt comfortable in my other roles. I was an insurance salesman for 7 years, something that never really excited me. I tried real estate and teaching, too, but nothing seemed to “fit.” Of course, I was streaking intermittently throughout my entire working life. Having taken it up full-time 13 years ago, I now know that I found my true calling.

When did you first streak?

My first tentative streak was at the age of 15. It was early in the morning and I had slept poorly during the night. I was restless, chronically so. I was blessed with a large wanger but little courage and a lack of social skills. That morning, however, I got out of bed, naked as usual, and went straight outside and just kept on running.

I don’t even know how many people I passed, I felt so free that I didn’t care about what people would say. I tired after about four miles, at which point I went into MacDonald’s for breakfast. I was soon escorted home by the police.

Do you believe that there is a psychological background to your streaking?

No! Seriously, I just love the feeling. My parents sent me to a psychologist when I was 19; she asked me the exact same question. She dug deep into my past and found only one event that could possibly relate to an ingrained psychological “defect.” I happened to mention a day in school when some older kids stripped me naked and tied me to the railings outside the girl’s changing rooms. I was only there for about 45 minutes.

Do you associate with other streakers, female or male?

Not really. I know some female streakers. You may have seen Betty D’Bois, a French streaker famed for her incredibly hairy bush and a spectacular streak during the 1995 Tour de France. I also keep in touch with Fatima Flangé by email, a woman famed for her gargantuan breasts and stylish unicycle streaks.

I know quite a few male streakers but we don’t hang out much. The rivalry between male streakers is quite intense. That’s why you’ll never see a dual-streak involving two men. Too much ego, too much pride. It simply never happens.

What was your proudest streaking moment?

That’s a toughie… I’m English, so it’s always nice to do a good streak on home soil. In that respect, one of my fondest memories was the 2001 Merseyside Derby football match. That’s a Liverpool versus Everton “soccer” match for all you soft Yanks out there. I got a lot of respect from the soccer streakers community for that one.

My most notorious streak was during the changing of the guard at Buckingham Palace. I managed to get inside the gates and run for about 3 minutes before I was taken down by a member of the Queen’s Guard. I actually ended up in hospital for 2 weeks after that. I had a Union Jack flag hanging from my arse, pole and all. The whole thing got lodged three inches up my jacksie and it took 48 hours to remove it.

And your international streaking appearances?

The Kentucky State Fair Monster Truck streak was great. I took a severe beating backstage afterwards but it was worth it. Running between the wheels of a moving Monster Truck is one hell of a rush. I also streaked during the 2004 Colombia versus Peru volleyball match in Lima. I always like to streak in front of a primarily female audience. I shagged the Colombian middle blocker after the game, so that was a pretty successful trip. Sadly, I can no longer enter Peru.

What are your future goals?

So many, so many… Obviously, everyone wants to streak the Super Bowl or a World Cup final. Beyond that, I’m looking at a high-profile streak in Dubai, perhaps a street run followed by a polo match.

I’m not in the best shape of my life right now, but I’m still capable of anything. I’m not going to give too much away; these things need to be planned carefully. Ultimately, I’d love to be recognized in The Streaker Hall of Fame.

I also hope my parents will someday come to terms with what I do. To hear my father say “I’m proud of you, son” would really give me the courage to take my streaking to the next level and beyond. 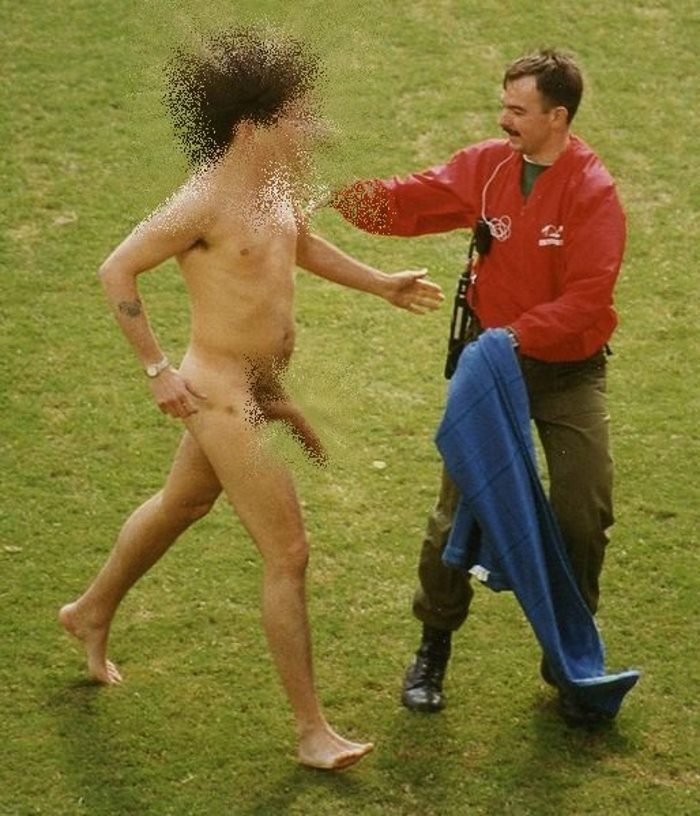 Mr. G streaking at a soccer game in the UK in 2006, when he was in his physical prime. “I could climb the highest barriers and jump over the tallest walls back then. Just had to make sure I didn’t get my dick caught in the fencing.”